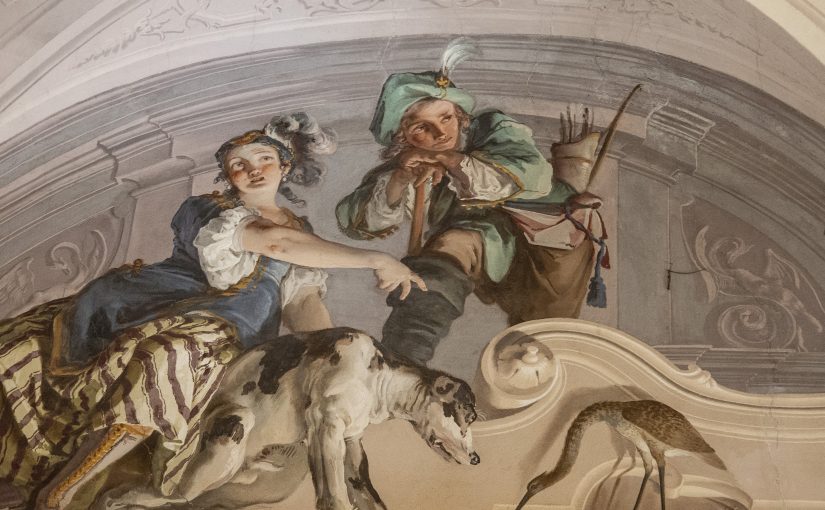 Most of you who are our friends and family know that each year Kay and I spend the last two weeks of July attending the annual conference of a literary society. Each year it is held in a different European venue. This year’s was Vico Forte, a small village with a large church in beautiful Piemonte (“foot of the mountain”) of northwestern Italy that borders France and Switzerland. This is a rich, bountiful region, and although our conference activities kept us intensely busy morning, noon, and evening, our program did include group visits to sights we might not have discovered on our own.

From the 11th century onward through the centuries, the dukes of the House of Savoy ruled Piemonte autocratically from their capital of Torino. Today, opulent residences in and around that city remind us of their wealth and power.

Hunting had to have been a favorite pastime of the Piemontese aristocracy during the 18th century when in 1729 then ruler Vittorio Amadeo II commissioned a hunting lodge. The American idea of a hunting lodge as a humble, rustic affair couldn’t be further from the reality of ostentatious Stupinigi, a palatial pile about ten kilometers from Torino Center. There, during a couple of delightful hours, our group toured its salons, galleries, and private apartments under the easy-going guidance of Stefano, a native of the area whom we would meet again on a later excursion.

Stupinigi’s rooms are only partially furnished, yet so good is their restoration that the frescoed walls and ceilings with their various tromp l’oeil effects look as if they could have been executed this year.

The hunted prey seems overwhelmingly to have been deer. Fittingly, the roof of the main palace is crowned with a bronze sculpture of a stag with large antlers. 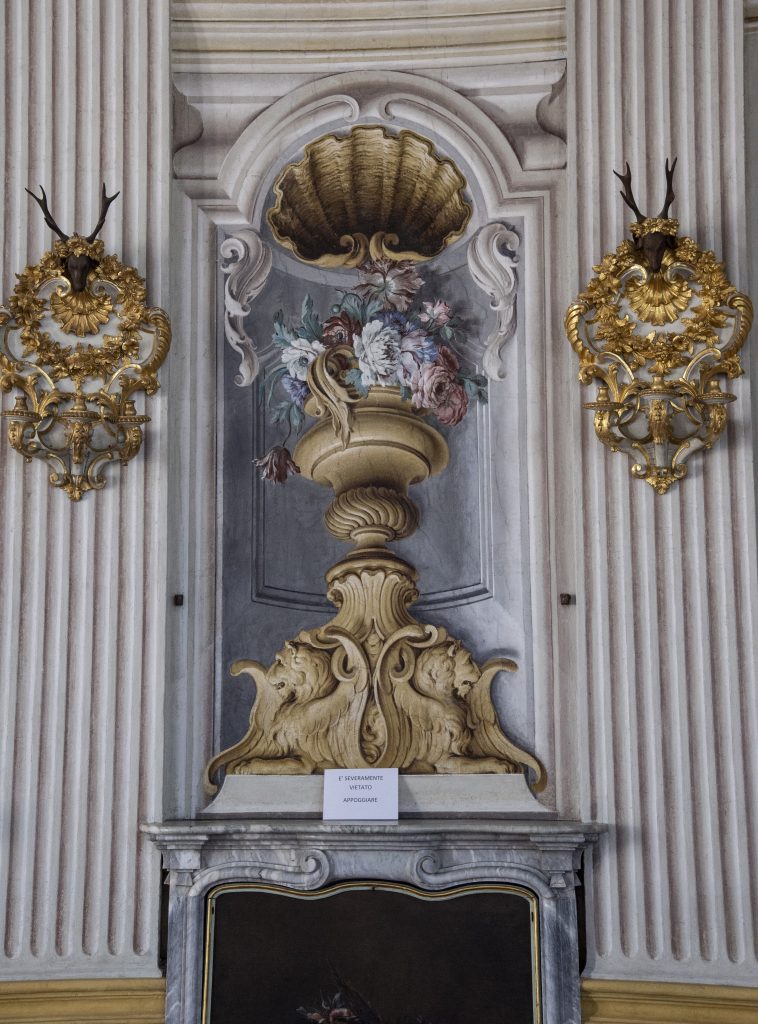 Furthermore, interior walls abound with variations of the deer motif.

Of the various mythological figures portrayed, it is the Roman Diana, goddess of the hunt, the moon, and wild animals that predominates.

Kay and I particularly admired the fabrics covering some walls in the private apartments.

Look at one of the curious lower door hinges. They are designed so that when a door is opened it tilts slightly upwards and backwards. 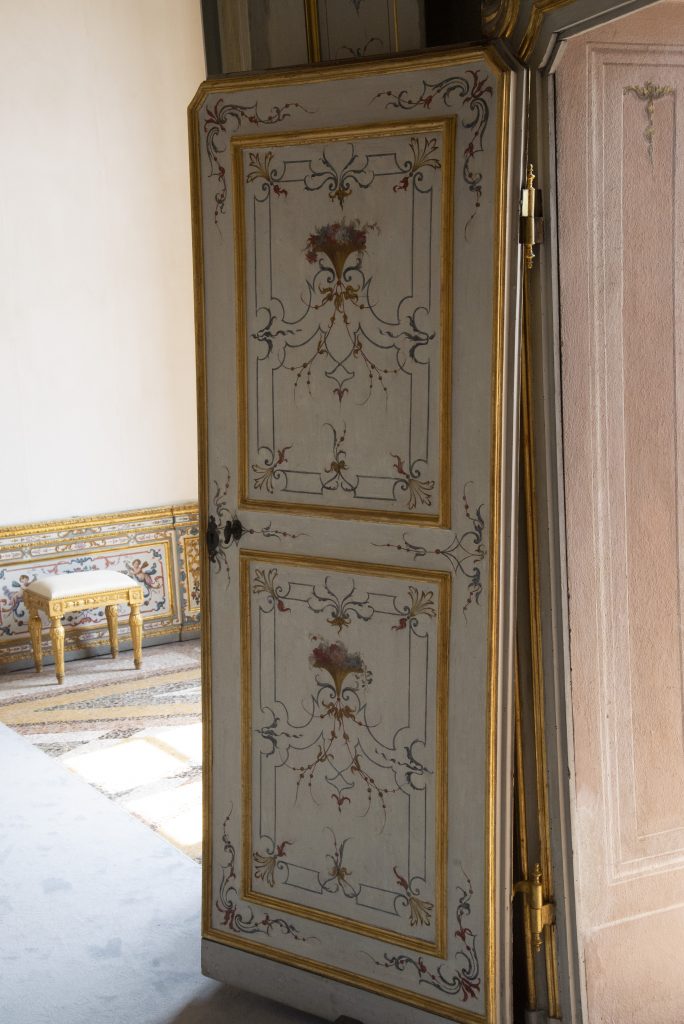 A possible explanation was to accommodate the thickness of floor coverings.

Not far above our base at Vico Forte are the hills of Le Langhe, a highly cultivated region of vineyards and hazelnut orchards. On this visit we bypassed the town of Barolo, producer of one of Italy’s most famous wines, and La Morra, another well-touristed spot. We had enjoyed both of these places on an earlier visit to the region in 2012. This time we climbed the hills to what is known as Alte Langhe where two of the prettiest villages in the country are found.

and a large, silver, abstract sculpture of an angel with a head resembling a rose bud. The village is known for its rose bushes.

In Monteforte d’Alba we spent most of our visit under the shade of a cafe terrace sipping wine and beer. We are an aging cohort and none of us had the inclination to climb the village’s steep streets under a blazing sun. 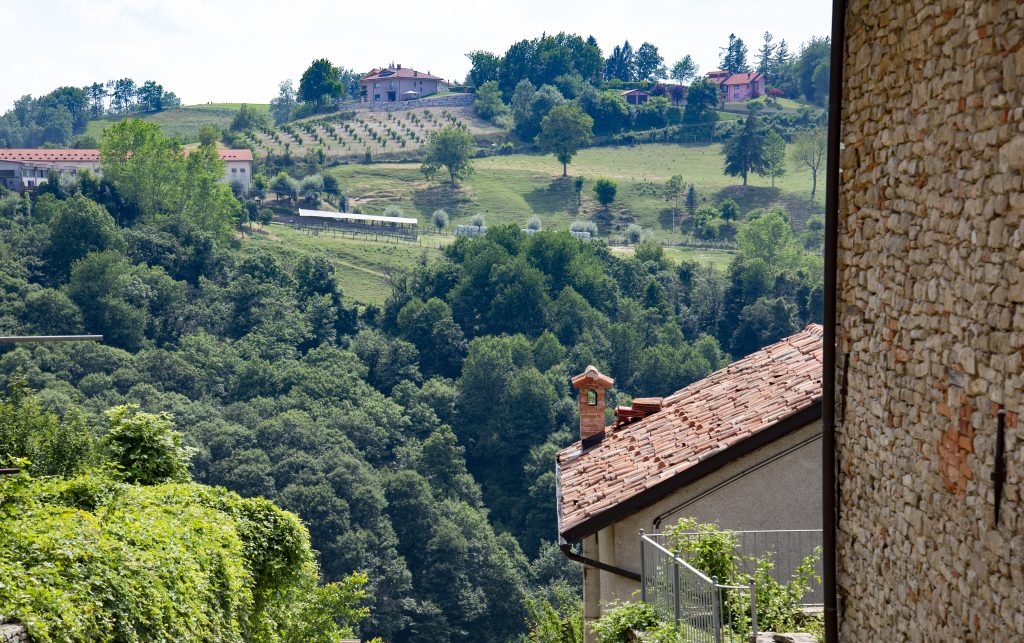 Maybe the best reasons to tour Le Langhe at this time of year are to view the planted landscapes, hillsides and valleys, uniquely Italian and green as can be, studded with farms and wineries.

Cherasco, a town of about 10,000 with a long history and many churches is memorable to us for several things: Once again, we were led by our favorite guide Stefano who met us at the Arco di Porta Narzole, one of the town’s ancient gates. He began our tour by giving us the unusual fact that Cherasco was founded exactly on the 12th of November, 1243.

Looking at the curious facade of the church of San Pietro patched with remnants of other buildings, we could well imagine that it is the town’s oldest building, dating from its beginning.

Its dark interior is lit by small, stained-glass windows set high in the walls near the ceiling.

Cherasco served as a refuge for Savoy nobility during times of plague and unrest when Torino was threatened. Scattered around town, their magnificent residences have undistinguished facades. One of the Savoy dukes made it a law that residences could not exceed two stories in height and had to leave exteriors undecorated. Interiors, though, were another matter. It seems that the Piemontese are conservative by nature and don’t care to show off.

One such residence, the Palazzo Salmatoris, was where a peace treaty signed in in 1796 gave Napoleon Bonaparte control of Piemonte.

We walked through a lively Thursday market featuring clothing, cheese, and some beautiful produce. I spotted the largest sweet peppers I had ever seen.

Stefano left us at lunchtime, and we were on our own. Seven of us found our way to the Osteria La Lumaca (the Snail) in the Via San Pietro. We were the only diners in a cool cellar room with ceilings vaulted in brick. The proprietor and his wife were friendly and most helpful in interpreting the menu. I began with an antipasto of celery, cheese, and chopped hazelnuts followed by Tagliatelle al ragù di Lumache. I think it was the first time I had eaten pasta with a sauce of tomato and snails. Our friend Jenny, who is a certified sommelier, chose a bottle of each of Rosato from Diego Morra Mosca and Roero Arneis 2017 from Giacomo Grimaldi. Otherwise, we drank water.

A short drive after lunch took us to the town of Pollenzo, marked by some unusual 19th-century neo-Gothic, redbrick architecture commissioned by the eccentric Carlo Alberto, King of Sardinia and Prince of Piemonte. At Pollenzo he wished to recreate a medieval village.

His architects built the red brick, neo-Gothic church and adjacent tower that anchor a compound, now the home, since 2004, of the University of Science and Gastronomy that occupies several buildings.

One of these, on what is known as Albertine Square, has become the four-star La Corte Albertina hotel.

At Pollenzo, we were met by another guide named Alice who led us to an outdoor map that explained the town’s Roman’s origins and layout. With most of our group fading quickly in the extreme afternoon heat, we soon went into a university building dedicated to the study of wine and where shelves were filled with choice bottles of Piemontese wines for sale. In addition, there were a number of books and displays about the Slow Food Movement that had begun in Italy. Kay and I took the opportunity to sit and rest our bones while others entered a cool cellar for the chance to do some wine tasting, for a price of course.

One exceptional excursion took us to the Castello della Manta near Saluzzo where in 1416 Valerano, the illegitimate son of the Marquis of Saluzzo, began to transform an earlier fortified castle into a stately baronial residence.

Led through a large kitchen and other rooms by yet another knowledgeable guide named Cristina, we entered a large baronial hall of frescos — among the most unusual in all of Italy. 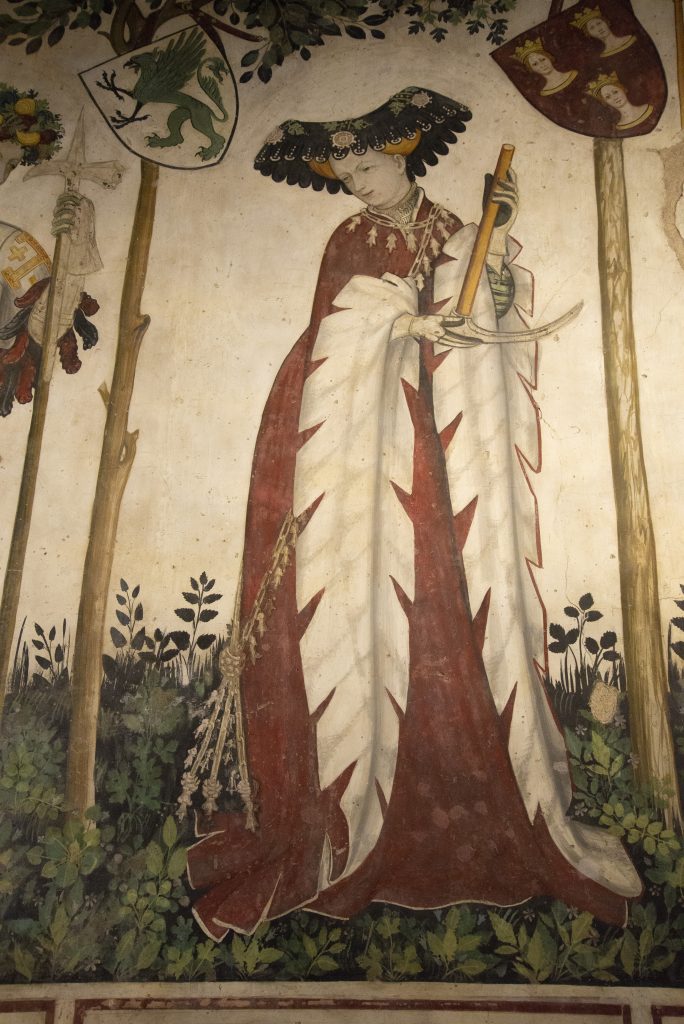 On one long wall nine heroes and nine heroines from mythology and biblical literature are depicted full length in the fashion of Renaissance knights and ladies. Below each figure, black-letter text in medieval French tells the story of Le Chevalier Errant. The figures are drawn with great individuality and detail.

On the opposite wall, a hexagonal Fountain of Youth has elderly figures of different social classes crawling into it from the left and leaving rejuvenated on the right.

In the central waters of the fountain newly young, nearly naked bodies embrace each other. This 15th-century, wall-length fresco, done with wit and humor, is splendid and likely unique. We felt privileged to have seen it.

In Vico Forte we spent nearly all of our waking and sleeping hours in the Casa Regina, an enormous former monastery or convent with

The housekeeping staff and those that prepared and served our meals were friendly and exceptionally efficient. As for the food, I can’t praise it highly enough. Each lunch and dinner, we began by helping ourselves to green salad and then being served two additional courses ranging from pastas and risottos to thinly sliced veal, pork, and beef accompanied by sauce and various vegetables. Twice we were given portions of baked rabbit and at other meals, baccala, which is dried, salted cod, reconstituted and prepared in appetizing fashions. Dessert was often fresh fruit and at other times cake or crème caramel. Table wines at each meal were a white Favorita and a red Dolcetto from the nearby region. We always eat well at our conference venues in other countries, but it is only in Italy, and especially in Piemonte, that institutional cuisine reaches such heights. Viva l’Italia!