Scottish beer is predictable while Scottish weather is not. I start with these facts because weather and beer figured so prominently in our travels in Scotland. About the weather: We knew, for example, with a fair degree of certainty that each day would contain some rain and some sun. What we couldn’t know were their frequency and proportions. Some days it would rain ten times, not hard nor long, just frequently. These bouts of rain would sometimes be interrupted by periods of sunlight so clear and intense that everything in sight would be transfigured. ‘Changeable’ is how the Scots understate their weather. ‘Dramatic’ is a better word because when one is out of doors for hours at a time, the Scottish countryside becomes a theater where the weather assumes the featured role.

Nowhere in Scotland is this truer than in the Highlands where Kay and I walked for a week with our friends Mike and Judy Stoner.

In all, we walked more than 70 miles along the Great Glen Way from Fort William to Inverness. We did this in seven days, sleeping overnight in various bed and breakfasts, lodgings that a company called Mac’s Adventures had arranged for us. Mac’s Adventures also carted our luggage from point to point so that after a long day’s walk we could shuck off our heavy boots and slip into something more comfortable.

Mike and Judy are seasoned walkers, but for Kay and me this kind of touring was a first.

As many of you know, I’m a cyclist and used to riding 70 or 80 miles a day on a bike tour. However, bike riding feels like jet travel compared to walking. For us, 10 miles was a good day, and, one day, the 16 miles that I had to walk took me right to the limit of my endurance. Much of the walking was on the flat, but sometimes there were steep climbs that took us high above the trees and valleys. 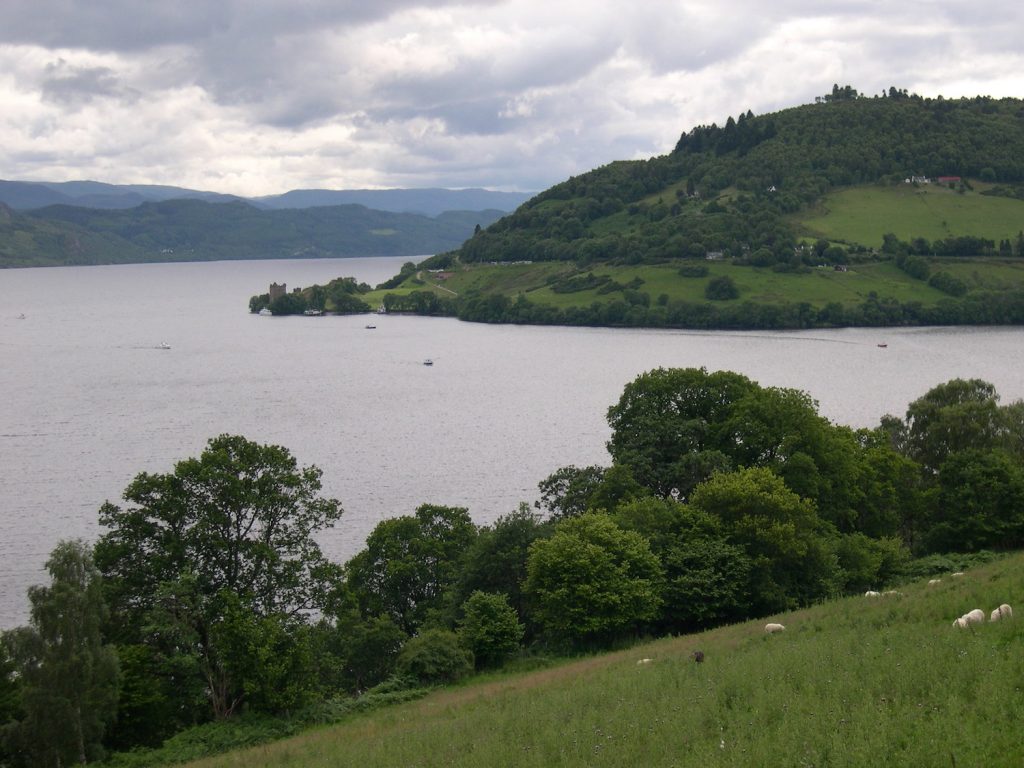 The payoffs for such climbs were the views: magnificent panoramas across Loch Lochy, Loch Oich and , , ,

of course, the famous Loch Ness which because of its enormous depth holds more water than any other lake in Britain.

There were man-made sights, too: The Caledonian Canal, whose banks we followed from time to time, connects the lochs and is a marvel of 19th century determination and engineering.

Here, at one point, we found Neptune’s Steps, a close succession of nine locks that lift and lower boats a hundred feet or more.

Another highlight was Urquhart Castle, built in medieval times on the shore of Loch Ness. Today, it’s a peaceful ruin that gives few hints of its turbulent and bloody past. Fortunately for us, the Scottish authorities do a great job of interpreting their history in a way that opened the doors to our own romantic imaginations. When I was a teenager, I enjoyed reading a few of Walter Scott’s novels and I dreamed of visiting Scotland one day. In a way, this week in the Highlands was a dream come true.

Fort Augustus and Drumnadrochit are two villages along the Great Glen Way where we spent the night. To us, footsore and tired as we were, they appeared as veritable oasises with shops, lodgings, and pubs. The pub figured importantly in our daily routine.

Water may be best, as the Victorians said, but by the time we reached a pub at the end of a day, we had been drinking water for hours and what we wanted was beer. Now, apart from lager, always available in Scotland as it is at home, Scottish beer comes in several varieties whose distinctions are so subtle they escape me. I found them all dark, deep and refreshing. Made with fewer hops, they are as smooth as velvet, which, in fact, is the name of one brand

No matter how glorious the scenery, walking mile after mile becomes repetitious. I tried singing (To spare my companions I usually did this during those moments when I was alone.), which is something I haven’t done in years. One problem was that, although I love listening to different kinds of songs, I haven’t memorized the lyrics to many, so I sang only parts of songs, wishing I could remember more. Does anyone know the last verse to The Happy Wanderer?

A different kind of distraction was my attempt to get more deeply present to my surroundings. This involved looking more closely at nature than I usually do. As I did this, I realized how little I really know about it. I thought of Bill Bryson who, in explaining how he came to write A Short History of Nearly Everything, says that some years ago he had a moment when he realized that he didn’t know very much at all about the world around him, and this realization became the impetus to research and write the book.

My own observations were pretty obvious. I did notice that the highlands contain more quantities and varieties of moss and lichens than I’ve ever seen anywhere else. Everything close to the earth is covered with this green growth to the point where it’s impossible to know what lies beneath it. The earth comes to look invitingly like a soft bed where rocks and tree stumps are the pillows.

Another observation concerns the plants growing next to the trail. Besides a thousand shades of green their predominant colors came from the cooler half of the spectrum: the wild foxglove flowers were magenta, blooming heather, a dull purple; some flowers were lavender, others, an intense purple verging on indigo. Why these colors should predominate I have no idea. If you naturalists out there know the answer, please share it. 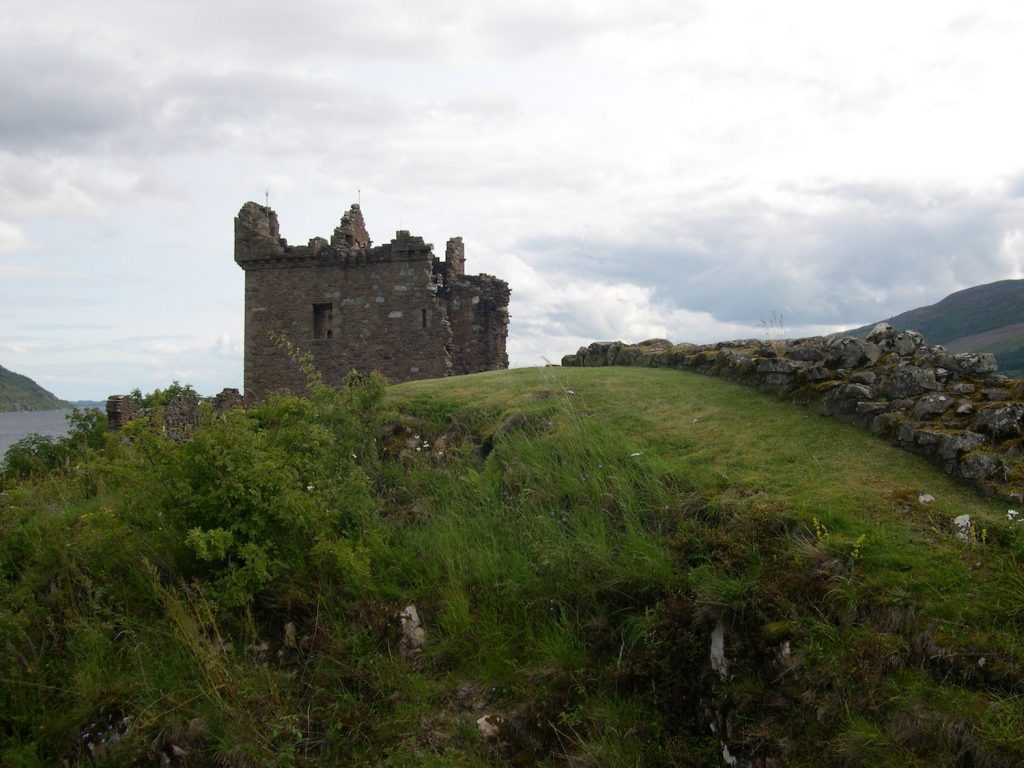 Earlier, I mentioned the dramatic weather. Much of this was contained in the forever changing clouds. At times, the sky seemed huge, and as the clouds swirled and mutated, their contrasting shades of light and dark and their halos of light were a constant source of delight. Later, after we had left the Highlands for the museums of Glasgow and Edinburgh, we looked at some magnificent collections of Dutch paintings, and I felt I understood how those great artists of the Golden Age came to give so much importance to the sky when they painted nature.

In fact, those paintings of rural scenes where humans and animals are small and nature is large exactly recalled my feelings as I had stood in some high place the week before and looked around me at the sky and the winding path where far ahead other hikers threaded their way through the natural canvas.

Our week in the Highlands was an unusual one, but so were all seven weeks of our summer travels. We saw many wonders both natural and man-made and came to a deeper appreciation of how we’d like to spend the months and years ahead of us.